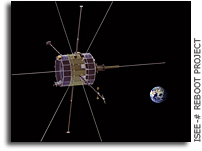 Calling Back a Zombie Ship From the Graveyard of Space, New York Times (front page story)
“For 17 years, [ISEE-3] has been drifting on a lonely course through space. Launched during the disco era and shuttered by NASA in 1997, the spacecraft is now returning to the civilization that abandoned it. It seemed destined to pass without fanfare, except for a slight chance of slamming into the moon, and then loop aimlessly through the inner solar system. But now, a shoestring group of civilians headquartered in a decommissioned McDonald’s have reached out and made contact with it — a long-distance handshake that was the first step toward snaring it back into Earth’s orbit. … Mr. Wingo and Keith Cowing, the editor of NASA Watch, a sometimes cantankerous website covering news and gossip about the space agency, had previously collaborated on a project that resurrected equipment to read 50-year-old magnetic tapes, extracting high-resolution images taken by NASA lunar orbiters in the 1960s — a task NASA had also regarded as infeasible. Mr. Wingo and Mr. Cowing decided ISEE-3 was another worthy effort.”