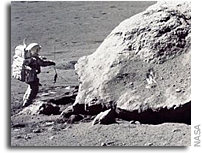 Memorial: Bill Muehlberger, University of Teaxs Austin
“The Jackson School community mourns the loss of Bill Muehlberger and extend their condolences to his family. He died of natural causes on Wednesday, September 14. An emeritus professor in geology, he taught at the University of Texas at Austin for nearly 40 years before officially retiring in 1992. He also taught geology to multiple generations of NASA astronauts beginning with Apollo.