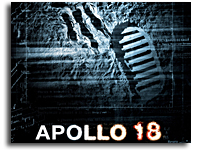 Apollo 18: A Review And Interview With Technical Advisor Gerry Griffin
“People’s fascination with space conspiracies has always intrigued me. Facts are irrelevant once someone has made up their mind about something – usually involving the big evil government covering something up – usually evidence of aliens visiting us. I have some personal experience with this via my involvement with the Lunar Orbiter Image Recovery Project (LOIRP) which is being run on a low budget basis outside the gate at NASA Ames Research Center in a McDonalds hamburger joint that closed years ago. The building was free and we were not fussy. With my co-lead Dennis Wingo and a lot of help from NASA and volunteers, we managed to restore images from the original 40+ year analog data tapes at unprecedented resolution when compared to what people saw in the 1960s. More information can be found at the official LOIRP website at http://www.moonviews.com
I bring up LOIRP for one reason: the nature of the original photos and what people imagine they see. Unlike most planetary missions, the Lunar Orbiter probes took their images on conventional film which was chemically processed in lunar orbit, scanned electronically, and the data sent back to Earth by radio. While the automated photo developing process itself was amazing, it had flaws. Often times problems with the chemicals or the gears would leave blobs and strange shapes on the images. ANyone who has spent time looking at the photos knows what I mean.
Well … some people with over active imaginations have concluded that a secret government agency obliterated certain things to keep us from learning the truth (whatever that might be). Secret moon bases I guess. Others see strange shapes which they have decided are bulldozers or cities. What they never bother to check is the scale of these photos. If there were indeed bulldozers on the Moon these Lunar Orbiter photos they’d be 10 miles high.
When we were getting ready to release the images some of the nutty websites got word and came up with all manner of zany conspiracy theories. My favorite was linking the fact that we were doing this in “McDonalds” with “McDonnell Douglas” and some evil dark conspiracy. The fact that they can’t even note the difference in the spelling of these names says a lot. They also made a lot of the fact that ARC’s Center Director is a former USAF Brigadier General. Oh yes, and there is that pirate flag I hung in the window – that didn’t help either.”