NASA Dives Into Its Past to Retrieve Vintage Satellite Data, Science (subscription)
“Last month, researchers working out of an abandoned McDonald’s restaurant on the grounds of NASA Ames Research Center recovered data collected by NASA’s Nimbus II satellite on 23 September 1966. The satellite soared over Earth in a polar orbit every 108 minutes, taking pictures of cloud cover and measuring heat radiated from the planet’s surface, and creating a photo mosaic of the globe 43 years ago. The resulting image is the oldest and most detailed from NASA’s Earth-observing satellites. It’s also the latest success story in what researchers call techno-archaeology: pulling data from archaic storage systems. Once forgotten and largely unreadable with modern equipment, old data tapes are providing researchers with new information on changes in the surfaces of Earth and the moon…”
… The LOIRP team obtained $750,000 from NASA and private enterprise and enlisted the assistance of a retired Ampex engineer. They cleaned, rebuilt, and reassembled one drive, then designed and built equipment to convert the analog signals into an exact 16-bit digital copy. “It was like dumpster diving for science,” says Cowing, co-team leader at LOIRP. In November 2008, the team recovered their first image: a famous picture of an earthrise taken by Lunar Orbiter 1 on 23 August 1966. The team’s new high-resolution version was so crisp and clear that it revealed many previously obscured details, such as a fog bank lying along the coast of Chile. “We thought if the Earth’s surface looks that good a quarter of a million miles away, what does the moon’s surface look like 100 miles beneath it?” says Cowing.”
Click on image to enlarge 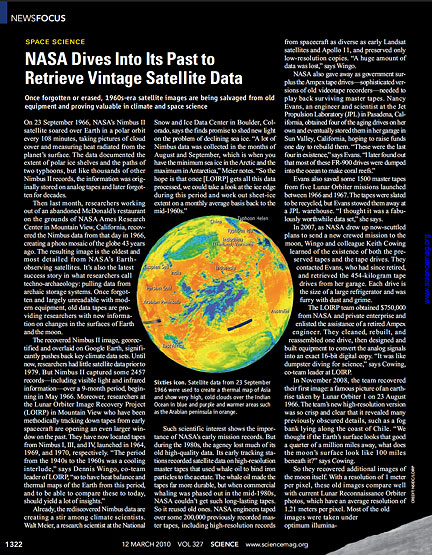 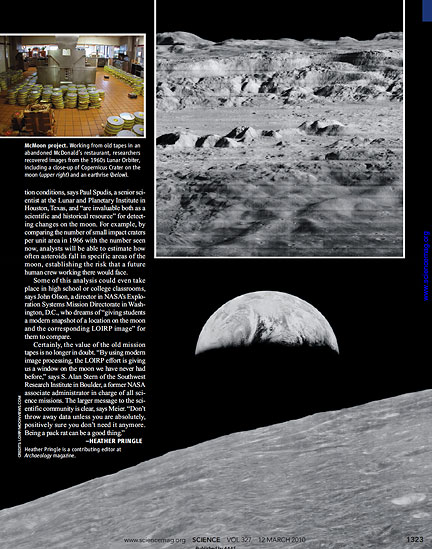